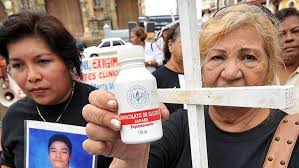 Hundreds of people participated in a memorial  service  in Panama City  on Tuesday, June 4 to commemorate the over 800  who have died  in the last 12 years from   the most deadly mass poisoning in the  country’s history,

They all died after taking a toxic cough syrup containing diethylene glycol distributed by the social security service (CSS).

Over 800 people died prior to 2018 and another 20 so far this year, mostly from disadvantaged backgrounds.

“These people have died without seeing the justice that we expected, " Gabriel Pascual told the Efe.News Agency

Pascual,   chairman of the Committee of Relatives of Victims and Survivors for the Right to Health and Life, said that the first victims met in October 2006, when the first poisonings were detected. and “that date “marks a milestone in the life of thousands of Panamanians.”

A total of 8,000 are estimated to be affected. with hypertension, diabetes and kidney failure, forcing them to which is why they consume multiple medications.

The intoxication was more evident in adult patients between 40 and 80 years.
diethyline-glycol
Share
Previous Post
Wuhan virus first case in Americas as deah toll reaches 17
Next Post
US reports second Coronavirus case, and France gets two