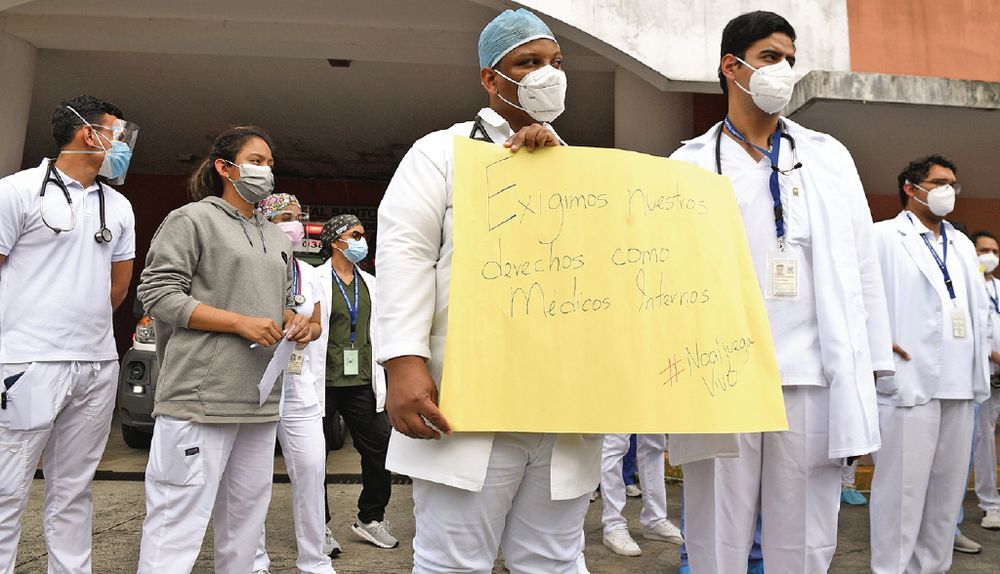 Ministry of Health reports show a reduction  in covid-19, deaths, hospitalizations, active cases and percentage of positivity The number of hospitalized patients fell, in the past week,  after being on the rise for 10 weeks.

.The last epidemiological week (January 24 to 30) of the Covid-19 disease closed with   258 fewer patents, hospitalized

Arturo Rebollón, epidemiologist and public health specialist, said  that the quarantine slowed the acceleration of the pandemic

Ii the fourth week of the current year, 9,602 new infections were reported, which represents 3,980 fewer cases than those reported in the previous week (January 17 to 23) when they reached 13,582 cases.

During the first epidemiological week ( January 3 to 9), the Ministry of Health) reported 25,008 new infections.

Rebollón highlighted that the daily average number of cases was reduced to 1,372, which at the beginning of the year was 3,300. "This may be a paradoxical response due to fewer tests," he said.

Rebollón's explanations about the decrease in tests are: the fewer patients, the fewer people seek tests or there are limitations in the laboratories that do not allow more tests to be processed in the appropriate time.

The scenario is favorable for the reopening of commercial activities in the coming days, as the indicators show a decrease.

https://www.stopworldcontrol.com/cures/ Cures for Covid-19 confirmed by Medical Experts including H202 videos by doctors. Nobody has a crystal ball, but these perpetual lockdowns are strangling businesses across the world and destroying society. There are talks in Europe of extending them into September 2021. There are others talking "they" want these lockdowns for the next 5 years. Remember when they conned us with "2 weeks to flatten the curve" that turned into a year of lies, deceit executed on fraudulent PCR reporting used to implement these draconian measures against humanity which even the WHO admits after fraudulently telling the world to use 40 cycles on purpose now states otherwise and we know that anything over 10 cycles creates almost 100% false positives. There will most likely be extreme violent uprising in the spring to summer as people revolt against the draconian overreaching measures taken against the people across this world. This is extreme and unlike anything in history. We are living in history and many books will be written about this time and the stories within them will depend on who the victor is. Trust in both government and media is at the lowest levels ever in the worlds history. Using John Hopkins Hospital world wide data (which is said to be over reporting a study came out of the USA that reporting was 16.7 times too high due to 'Illegal' inflation of the fatalities,) still using inflated numbers the current global death rate is an astonishingly low (lower than influenza) 0.000292 which is close to zero mathematically as they terrorize the general population with "New Cases" based upon EU court disclosed findings in case law that 97% are false. That means out of every 1000 cases in the news only 30 are real. Get what is going on now? What is going on has NOTHING to do with what you have been told. It is much more sinister and it is impacting everybody around you and they are destroying everything about society. 10,000,000 people per day are waking up from this bad nightmare and those responsible for these crimes will pay! If Someone dies of a pre-existing condition, they call it a covid death. If someone dies from having the experimental vaccine they say they died of a pre-existing condition. Anybody questioning any of this yet?

There is no proof in no country that lockdowns could slow the virus. Panama as a country where the poors don't have any real housing opportunity even in the City of Panama is a perfect example for failing lockdowns. For me Cortizo brought the proof that lockdowns increasing the spread of the virus. The same is the joke of the almost dictator Trump. He claimed to have saved more than 3 million lifes by closing the borders. Fact is there is no way to spare out a virus only a way to kill the economy. And even here Cortizo brought the proof : He killed the economy in full. Europe is on the way to him but the echo is yet to come.

COVID-19 Fatalities 16.7 Times Too High Due to 'Illegal' Inflation https://www.greenmedinfo.com/blog/covid-19-fatalities-167-times-too-high-due-illegal-inflation1

USA just reported NO ABNORMAL DEATH in fact lower than expected...anybody with a brain understands in a REAL PANDEMIC there is EXCESS DEATH! Panama also has lower than expected death. The real science and doctors expose all lies, deceit and fraud. https://www.bitchute.com/video/xnFrXiXiZMui/ DR. CHRISTIANE NORTHRUP: WHAT’S INSIDE THE COVID-19 VACCINES? THIS PANDEMIC SHOULD HAVE ENDED MONTHS AGO IF WAS NOT FOR THE FRAUD AND HOW DOCTORS ARE SUCCESSFULLY TREATING WITH ZERO FATALITIES! https://www.bitchute.com/video/xvAuI5juiEGU/ THE LOCKDOWN WILL KILL 10 TIMES MORE PEOPLE THAN THE VIRUS ITSELF https://www.bitchute.com/video/XWzGihqwtVbx/ DR. MICHAEL YEADON UNLOCKED: WHY LOCKDOWN WAS A MISTAKE MORE THAN 60% HAVE IMMUNITY ALREADY https://nypost.com/2020/10/11/who-warns-against-covid-19-lockdowns-due-to-economic-damage/ WHO warns against lockdowns due to economic damage done by them. https://off-guardian.org/2020/12/19/how-belarus-exposes-the-lockdown-lie/ How Belarus exposes the lockdown lie https://sputniknews.com/columnists/202005081079237565-why-sweden-and-belarus-defied-the-lockdown-consensus/ Why Sweden and Belarus refused to lockdown https://www.christianpost.com/news/more-youth-are-dying-of-suicide-overdose-than-covid-19-during-pandemic-cdc-director.html More youth are dying of suicide, overdose than COVID-19 during pandemic: CDC director

802, what they wrote makes no sense. Perhaps they meant reduction in tests resulted in the number of cases (what they erroneously like to call infections). But either way, it’s a con

WOW, decrease in tests DUE TO LESS TEST GIVEN... BUT THEY SAY that the quarantine slowed the acceleration of the pandemic. WOW JUST WOW GENIUS

Removing human rights might accomplish a short-term goal but I worry we’re headed on a wrong-track if the option is to sacrifice health and freedom. I don’t want to perpetuate name-calling whether it be brain-dead, idiots, or covidiots but I watched the below presentation and I urge, with all sincerity, that you view it with an open mind as the issues of the Virus and Vaccines are approached differently than heretofore presented (in Bitchute as content censored on other platforms, but don’t let this deter you from a great message from a highly acclaimed source not some quack). *** Bio-warfare & Weaponization of Medicine Amid Covid https://www.bitchute.com/video/mvI-_jXck7Y/ I invite anyone to open up a conversation providing it’s respectful and productive, if desired. Who knows? Maybe even it might resonate with someone in authority; one can only hope!