Pandemic in Panama in control phase 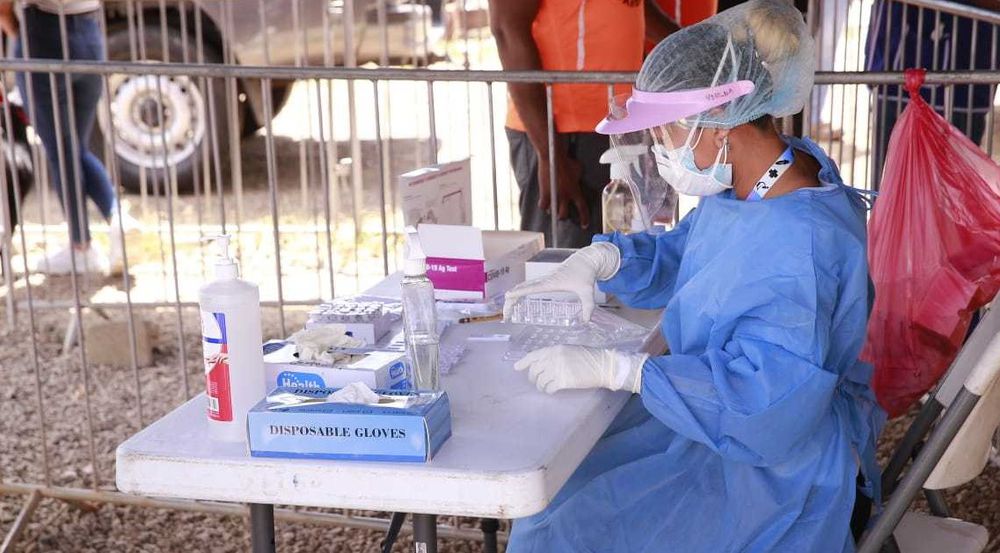 According to the epidemiological criteria of PAHO / WHO, the pandemic in Panama has been in the control phase for 10 consecutive weeks," with a positivity of 4.3% which dipped to 3.3% last week says the report of the international body  published Wednesday, December 1. According to the indicators, it is considered good to have a positivity below 5%.

Regarding the increase in cases in recent weeks, PAHO also details that after EW 43 (from October 24 to 30), all age groups show an increase in the incidence of the new coronavirus.

Active cases registered an increase of 22.3% in four weeks.

Regarding deaths, PAHO reports that 16 deaths were reported in EW42, but that in the following two weeks there was a decrease and the figure returned to 16 deaths in EW45. However, it fell to 8 and 9 deaths in weeks 46 and 47, respectively, with a reduction of 44%; varying between none and 2 daily deaths daily.

Thank you Brian and Hogan for all your posts in getting the truth out. Canada is pushing the vax for our children. Over 300,000 given the shot this week. Parents are receiving invites by mail to register them and saying the shots are proven safe. Can you believe this shit? We could end up like Australia!!! We are in Rally’s every weekend and trying to educate people. So many masks walking around with no clue these are making people sick. Vax mandates where many people no longer have jobs as some refuse the shot. Our mainstream does not allow for comments as we are allowed on this format. Keep up the great work and pray for the rest of the world who are under tyranny.

I wrote about the wave of global legal cases that were coming ALL across the world. The commie bastards on this site denied them. Eat your useless commie bastard word you commie pukkers. People like Captain a-hole (his communist buddies like adj, sral and harley rides-a-pole) are enemies to humanity. I have said this for a long time as they have continuously supported the tyranny and terrorism. I remember when these people called for more false imprisonment and shouted how safe these KILL SHOTS were with zero research, they proclaimed how successful these KILL SHOTS holding up Israel as an example but cannot explain the endless science and data out Israel that show these KILL SHOTS are flooding the ICU's and murdering people who took them and the same for country after country that pushed these KILL SHOTS. They cannot explain why Africa with as low as 1% KILL SHOTTED has no pandemic, the biggest videos circulating the planet now show the African's saying F off like the Amish did and living life normally as if nothing is going on because they realized the truth. Remember folks in order for there to be great crimes against humanity it takes people like the above to support them.

More wonderful news for all humanity against the terrorists murdering children. Doctors and nurses who refuse these KILL SHOTS will NOT have to be forceable raped by violating Nuremberg Code of 1947 courts rule! FANTASTIC NEWS! Federal Judge Bans Biden’s Mandate in 100% of States; 10.3M Health Workers Affected by this positive court ruling. The terrorists are scared to death as I said legal cases after legal case is exposing these deadly KILL SHOTS, they are ineffective and worse they are skyrocketing death. New data out of every country that pushed these KILL SHOTS into the veins of their citizens is now showing RECORD PEAK DEATHS! Germany just hit record peak deaths along with every other country that is highly injected...the KILL SHOTS are murdering those who took them at record levels never ever seen in 2020!

Harvard Research Confirms What We've Been Saying for Months There is not evidentiary correlation between cases and vaccination rates || https://covidreason.substack.com/p/harvard-research-confirms-what-weve

Do COVID Injections Compromise Natural Immunity? The answer is definitively YES. || Replacing the default natural immunity with an artificial tool is a very successful case of creating a brand new market ('artificial immunity market') out of air. A life-long subscription to artificial immunity, with an ever-expanding range of necessary 'upgrades' is a lot more profitable than some traditional shop selling vitamins. Even better, if artificial immunity destroys the natural immunity, customer loyalty is guaranteed. But it gets worse. [from reports]. “ In order for the mRNA vaccine to get into the body and be allowed by the body to do what it is designed to do in the ideal world, the body's natural immune reaction to foreign mRNA needs to be turned off — otherwise it will attack the invader on entrance and voila. Thus, with the current technology, the body's "security alarm" gets turned off in order to let in the mRNA. But of course, that same security alarm is generally needed by the body, and it is currently unknown what kind of long-term effect turning it off in the context of these injections has on one's immunity. If we are to look at the studies that are starting to come out now, the overall effects of turning off the "alarm" might be, well, alarming. According to a 2021 study (not yet peer-reviewed) by a team of scientists from the Netherlands and Germany, titled, "The BNT162b2 mRNA vaccine against SARS-CoV-2 reprograms both adaptive and innate immune responses," the vaccine "modulated the production of inflammatory cytokines by innate immune cells upon stimulation with both specific (SARS-CoV-2) and non-specific (viral, fungal and bacterial) stimuli. The response of innate immune cells to TLR4 and TLR7/8 ligands was lower after BNT162b2 vaccination, while fungi-induced cytokine responses were stronger." The paper further stated the following: "We observed a significant reduction in the production of IFN-α secreted after stimulation with poly I:C and R848 after the administration of the second dose of the vaccine. This may hamper the initial innate immune response against the virus, as defects in TLR7 have been shown to result in and increased susceptibility to COVID-19 in young males. These results collectively demonstrate that the effects of the BNT162b2 vaccine go beyond the adaptive immune system and can also modulate innate immune responses." In other words, the BNT162b2 injection modified the innate immune response and seemingly weakened certain aspects of it, and no one really knows or understands the details and the very long-term consequences. If you are curious about the technical detail of how the "alarm" gets turned off, this Scientific American article explains what kind of modifications are used in the mRNA vaccines in order to trick the body into letting the foreign mRNA in. The article features two scientists: Karikó, senior vice president and head of RNA protein replacement therapies at BioNTech, and Weissman, a professor of vaccine research at the University of Pennsylvania's Perelman School of Medicine, who were awarded a $3 million Breakthrough Prize in Life Sciences for their work. The article says that "when foreign mRNA is injected into the body, it causes a strong immune response. But Karikó and Weissman figured out a way to how to modify the RNA to make it less inflammatory by substituting one DNA "letter" molecule for another." Here is how the researchers themselves explain the mechanism in a study called, "Suppression of RNA recognition by Toll-like receptors: the impact of nucleoside modification and the evolutionary origin of RNA": "DNA and RNA stimulate the mammalian innate immune system through activation of Toll-like receptors (TLRs) … We show that RNA signals through human TLR3, TLR7, and TLR8, but incorporation of modified nucleosides m5C, m6A, m5U, s2U, or pseudouridine ablates activity". 💥Now while all that gets pretty technical and hard to follow by some, here’s a clip from one of the great comedians, George Carlin, giving the same basic message years ago—may appeal to the more non-scientific of us cause he always speaks to the common man with truth. https://www.redvoicemedia.com/2021/11/classic-george-carlin-video-aged-so-well-i-could-have-come-out-today/ 💥perhaps since the “scientific” community can’t quite follow the Science, George’s words might resonate. Enjoy a bit of humor everyone … a break in the madness.

Spread this TRUTH this is big news...the terrorists and the Covidian Death Cult are coming undone now...it cannot be hidden anymore that they lied...what is coming is the global uncovering that these terrorists did this to brand people with the Mark of the Beast..those who took these KILL SHOTS are marked with a number just like cattle or slaves...these are evil terrorists who violated international and domestic laws and know they are now facing the death penalty for their crimes against humanity. Every last evil SOB will pay the prices for their crimes and suffering they caused across this world. The storm for these bastards is fast approaching and many cannot sleep anymore with the worry when the doors will be kicked and they will be dragged away hand cuffed...already politicians who are not terrorists are calling for arrests.

Lancet Letter Demolishes Vaccination Says vaccination does not even slow down the pandemic...The largest significance is that the article WAS ALLOWED TO BE PUBLISHED BY LANCET. This means that the tide of scientists being scared by government/globalists/Big Pharma funding is turning, and the truth is coming out at the highest levels of science such as the Lancet. https://www.thelancet.com/journals/lanepe/article/PIIS2666-7762(21)00258-1/fulltext?s=08#%20

GREAT NEWS! Another Legal victory for humanity against the terrorists! Belgian Court Declares COVID Vaccine Passports Illegal & Threatened To Fine Region Who Impose It https://greatgameindia.com/belgium-vaccine-passports-illegal/ | We are really seeing globally judges stand up against these murdering tyrant terrorists. This what I said was coming. We are in the process of shutting these terrorists down. Then will come arrests, prosecutions and executions later, after we stop children from being murdered and injured by these KILL SHOTS when we the science states they have no more risk than a common flu!

Time to end and wrap up this fraud. Shut it down now! How do you do that? Stop listening to terrorists and go about your daily life. More and more are doing that as they have had enough of these medical dictators and terrorists.