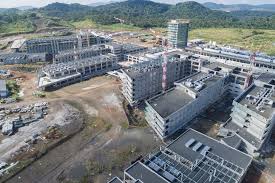 With occupancy at its maximum level Panama’s Children’s hospital (Hospital del Nino ) will have to face new delays before work begins on a new structure after five years of public events and ten years of great expectations.

This weekend was Panama Compra a resolution from the National Directorate of Public Procurement that orders the Ministry of Health (Minsa) to create yet another evaluation committee n to carry out a comprehensive review of the proposals that were presented in the public event of January 2019.

At that time, two tendering business groups submitted proposals: the Spanish Acciona Construcción, to which the evaluation commission initially awarded the highest score, and the Asian Camce Hospital del Niño. The project was not awarded because the losing company filed claims.

On July 15, the Public Procurement Directorate ordered Minsa to carry out investigations in order to complete the "truthfulness or falsity" of the documentation provided in the Camce consortium proposal, as well as the "validity" of the Acciona Construcción bond.

In the middle of this process, the Presidency of the Republic also created a committee, tp evaluate the future of the tender.

With this decision adopted by Public Procurement - the suspension of the tender was lifted and the proposals of both consortia will be evaluated again.

Hospital del Nino director, Paul Gallardo, and his staff have asked the Minsa authorities to make a quick decision given the overcrowded state of its wards and the emergency area.

The Children's Hospital attends about 350 patients daily in the overcrowded Emergency Department.

The price tag
The $558 million tender was published on January 8, 2019. However, public events to build the new structures have been held for more than five years and they never conclude.

According to the project, the new building of the Children's Hospital will have 476 beds and 14 operating rooms and a space for 700 parking lots.

It also includes the construction of a new maternity hospital for Santo Tomás Hospital, which will have 244 beds, 14 operating rooms, and 30 full-delivery room
Share
Previous Post
Clinical trials of Trump-touted drug to resume
Next Post
HEALTH: Beware cpntaminents in herbal supplements