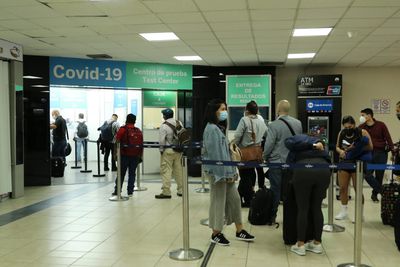 The Ministry of Health (Minsa) reported on Thursday that starting this weekend it will reinforce designated personnel at Tocumen International Airport to cope with the anticipated surge of travelers during the week of national commemorations.

"Due to the increase in passenger activity, it is expected to reinforce the health personnel who work in the swab centers, in order to guarantee their physical and biosafety conditions," Minsa reported According to the projections of the airport administration, about 30,000 thousand passengers will be mobilized during the national holidays, which represents an increase of 41% with respect to the regular average since the terminal reopened on October 12.

The Ministry  said  that the measure to reinforce the airport personnel is because of the increased flow of exiting and returning  travelers between, October 30 and November 9

" Passengers who do not have the Covid-19 test are automatically directed to the swab centers, which guarantees greater security for both them and for our nationals," said Deputy Minister of Health, Ivette Berrío,

In its weekly report, Minsa revealed that since the airport's reopening they have detected 43 people with the virus.

Airlines are recommending arriving 3 hours in advance to carry out the different procedures before leaving, including health requirements.

It's way to dangerous and inconvienent to travel at this time. Sitting on a plane breathing in virus just isn't worth the risk.