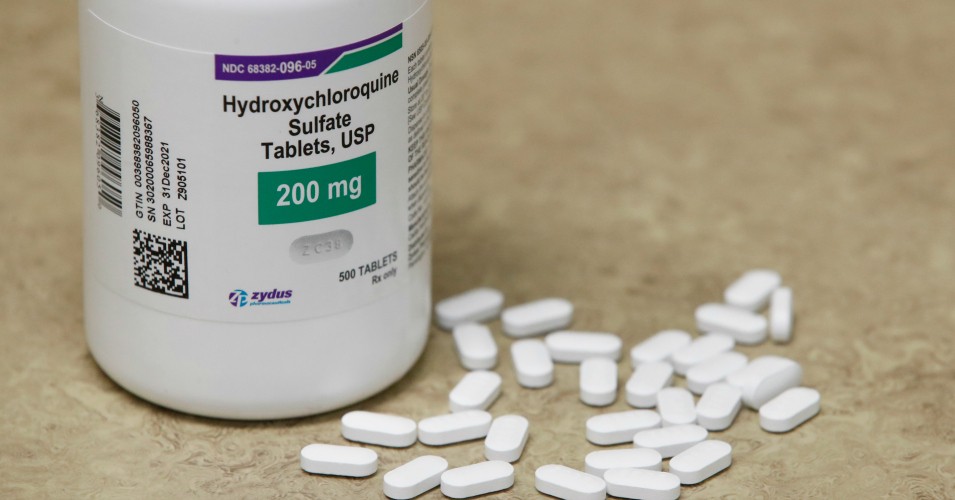 A study published Friday, May 22 in a prestigious medical journal found that the anti-malarial drug President Donald Trump claims he is currently taking—and has repeatedly urged others to take—is not effective for treating Covid-19 and could increase risk of heart problems and death in coronavirus patients.

The study, published in The Lancet, examined the medical records of 96,000 hospitalized coronavirus patients on six continents and found that "drug regimens of chloroquine or hydroxychloroquine alone or in combination with a macrolide was associated with an increased hazard for clinically significant occurrence of ventricular arrhythmias and increased risk of in-hospital death with Covid-19."

The authors found "no evidence" of benefits from hydroxychloroquine in Covid-19 patients—a result that is consistent with the findings of previous studies on the drug, which is most commonly used as a treatment for malaria, lupus, and rheumatoid arthritis.

Eric Topol, a cardiologist and director of the Scripps Research Translational Institute, told the Washington Post that "it's one thing not to have benefit, but this shows distinct harm."

"If there was ever hope for this drug, this is the death of it," said Topol.

Sen. Ed Markey (D-Mass.) tweeted that "the science is clear and the president, as usual, is dangerously wrong."

The new study comes just days after Trump told reporters that he has been taking hydroxychloroquine daily for over a week in an effort to prevent Covid-19 infection.

"I get a lot of tremendously positive news on the hydroxy," Trump said Tuesday, "and, you know, I say, hey... what do you have to lose?"

Trump has repeatedly promoted the drug as a possible treatment for coronavirus despite warnings from medical professionals that there is no evidence it is effective for Covid-19 patients. Retail sales of hydroxychloroquine reportedly soared in March, the month Trump called the drug a "game changer" for treating coronavirus.

"There is no evidence of benefit and there is evidence of harm," Dr. Rob Davidson, an emergency care physician and executive director of the Committee to Protect Medicare, said after the president claimed he's taking the drug. "Trump is responsible for the deaths of tens of thousands. Let’s not add to that number."

On April 24, the Food and Drug Administration cautioned against the use of hydroxychloroquine "outside of the hospital setting or a clinical trial due to risk of heart rhythm problems."

In a segment on NPR earlier this week, medical researchers and others explored the politicization of drug treatments as a sad development to emerge during the Covid-19 pandemic, with many placing the blame squarely at the feet of a president who has sidelined experts while injecting his own uninformed and often ridiculous claims into the national conversation.

I hope Trump and his minions continue taking HCQ. What do the medical journals know?

The lancet is HIGHLY reputable and is a scientific medical journal and not a leftist rag . In any case dont shoot the messenger. Go study the published document and you might learn something.

Here is a published study from 2005 that supports the theory that this medication helps fight against these coronaviruses. Which is it? It works or it doesn't? https://www.ncbi.nlm.nih.gov/pmc/articles/PMC1232869/

Anything Trump says is attacked by this media. If the cure doesn’t include vaccine it will be nixed by Pharma and anyone related or receiving profits from the vaccine. You think they care about you, well think again, this is all about power, control, money, vaccines, and Trump is not making it easy on them. The goal is to take out Trump and stick it to you with their vaccine and control the population. Time to wake up before you can’t. I am getting very tired of reading this socialist, Anti Trump news. This is pure garbage news of the lowest form.

Then dont read it and especially dont tout false information. This is all about saving lives not your stupid control theories. Wellcome trust and others will be providing these pro bono ( free for you ! ). Now thats a problem for you isn’t it.? Rather undercuts your storyline

This is not news. It is pure leftist lies, slander and propaganda. Catherine very first sentence is a bald faced lie! The President NEVER “urged” anyone else to take any drug. The rest is more of the same, heavy on the lies. This is no news oe opinion, it is a shameful example of just how low NRP will go to attack freedom.

This very much is news....when you have the President of the USA touting this rubbish in the full knowledge others will follow his recommendation its highly significant and needs debunking.

The communist leftists want everyone to die--except themselves. They are probably taking hydroxycholoroquine.

Because of the "thick headidness" of Donald Trump and his "I am the smartest guy in the room" mentality,is what lead to him making an ass out of himself with this drug. So, he can save face on recommending a medicine that doesn't work, and can kill you, he lies to the people that he himself is taking the medication. This gentleman talks a tough boy game, but he lacks the "juevos"to take a drug that can possibly kill you. The sad part is his supporters that will directly smell his farts, will go out and start taking the drug, just because he says he is taking it. Remember, 36,000 Americans died because Donald Trump dismissed this virus as a bad flu, and that it would soon blow over, and did absolutely nothing for almost 2 months.

Really the old leftist rag the "Lancet" is cited as a credible source? You might as well go to the WHO or straight to China for that matter. The hatred of trump is just reached new levels of lunacy on the left. If this tripe was true then millions of peoole who take it daily for lupus and prophylactic malaria would be throwing arrythmias and dropping dead. More leftist drivel from a non credible source!

The Lancey was founded in 1838 by an English surgeon who named it after what is now called a scalpel. which is needed to remove