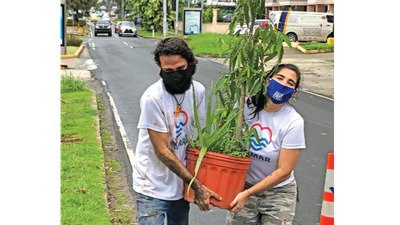 Panama can become a "green energy hub" where generation is more with renewable sources, to displace fossil fuels, experts from the sector concluded in a virtual forum on the energy transition 2020-2030, organized by the Union of Industrialists of Panama with the participation of the Center for Environmental Advocacy and the Association of Large Electric Customers.

"It could be a green hydrogen energy hub. There are already large consumers such as South Korea, Japan, Germany, and we have logistical opportunities, "said renewable energy promoter Nanik Singh.

The businessman added that "clear goals must be established in terms of reducing emissions" to follow in the footsteps of countries such as Chile, Denmark, and Germany.

Until 2014, electricity generation in Panama depended on thermal and hydroelectric power. Six years ago, wind and solar plants began operating in the country.

Until May, wind generation represented 7% of the installed capacity, with 270 megawatts; and 5% photovoltaic with 194.6 megawatts, according to the National Authority of Public Services.

@observer. You spout off about the people who dont comment on the article and then you do it yourself in the same column. Sheesh

Yep.....been here 8 years. Made many good friends. Both gringos and Panamanians. Love it here. The only reason I go to the states is to see kids and grand kids. Always happy to get back. Glad to see the whiners go away. Wish the posters here that constantly tear down this country would join them. Some of them even don't live here.

When the going gets tough the "tough" go scurrying back from whence they came. This beautiful country improves a little bit more with every "humanitarian" flight out of the country. I hope there are many more. These flights are filtering out those gringos that are weak willed, selfish and spineless. The cloud that is Covid 19 does have a silver lining.

Maybe the U.S. Embassy will book enough flights to get all of you unhappy "expats" out of here. Goodbye! Outgoing flights have hit an all time high.... good! All the Jews have not left. Mhogan... why throw in AOC and Bern? Got nada to do with the above writing. Cañas... sell the house! If not will you take a loss? A loss, that is, in what you think it is worth which is probably not the fact. This note is not, also, a reflection of the above writing, but is in reply to all you expat clowns who think you have a grip on reality.... take a read on what is really happening in you heaven..the U.S. ...

I haven't seen such a mass evacuation since the fall of Saigon back in 1975. We are going to get seats on one of these flights. I have to admit we were bitter clingers hoping week after week month after month that things would improve here but clearly not. Panama has reached a point that it will never again be the same place as when we decided to retire here. The thin veneer has been pulled back and what we have seen of the police state has convinced us to leave. The adverse economic effect of hundreds of thousands of foreigners fleeing Panama will be a crushing blow to many who served them and relied on them for their livelihoods. I doubt the new PRD Marxists care in the least!

How do the last 4 comments relate to the article? You guys just spout off.

We are going to join you Volunteer. We have seen enough! Being locked down with nothing open and watching the news here everyday is an eye opener. Two weeks of lockdown has become 5 months and I agree at least another year to go. Don't have many years left and can't waste them here! Going to list the house. Probably no prayer in selling but our happiness and safety is to important. Here in Cañas, Los Santos we are easy targets for the mala hombres.

It seems the Embassy must know something to book so many flights when supposedly the airport is going to reopen. My gut tells me this is going to drag on for another year. I hate to do it but I'm going to bust my lease and take one of the flights out. At least back home in Knoxville we can go outside without fear of arrest. Here in Panama my wife and I can't step outside the house together at the same time without fear of arrest. Lord forbid we should go grocery shopping together we will be beaten then arrested. Nuff said time to go!

Wow thanks Coiba! That's a lot of flights on top of the dozens of flights that have already evacuated fleeing expats. I think finally after 5 months see Panama is going down. The Jews were the first to see it and flee. Everyone knows that when the Jews flee it's time to go!

The demand to exit Panama has hit an all time high. The United States embassy has added many more escape flights due to overwhelming demand. Here is todays message I got from the embassy. Event: Planned Commercial Humanitarian Flights The Embassy has identified seven upcoming humanitarian flights with seats available. The flights are operated by Copa Airlines (flight numbers CM4983 and CM4982), United Airlines (both flights are number UA2417), and Spirit Airlines (all flights are number NK6511). The flights are scheduled for July 8, 9, 10, 14, 15, 17, and 20. There are no additional confirmed flights with available seats at this time, so if you desire to return to the United States, it is important to book immediately. Any traveler with the appropriate passport/visa to permit entry into the United States who wishes to depart Panama is eligible to purchase a ticket. Travelers should carefully plan their onward travel as hotel options in Dulles, Houston, and Ft. Lauderdale may be limited. Once in the United States, all domestic travel arrangements are the sole responsibility of the traveler.

I don't care how they do it! They can gather up the millions of Rats running up and down via espana and put them on a treadmill. What ever it takes to have power and water that isn't constantly going off.

You know you’ll be competing for “green” with Costa Rica. They are years ahead and ask them how the consumer price of going green has moved industries (and jobs) out if the Country. Be prepared for electric bills 3x what is now charged. After the “in” industries get their subsidy to reduce impact, the “people” will suffer even greater. If you’re into the environment, how about cleaning up the garbage that proliferates roadside and the beaches first. There are lots of important and urgent issues In Panama; I don’t think the cost of going green right now should even be considered. Perhaps after the COVID decides to move off, incest and rape of minors, education worthy of developed nations, and a healthcare system that actually works to improve health, rebuilding a vibrant economy destroyed by lockdowns should be priorities — unless you’re AOC or feeling the Bern of more socialism.

Hope the company running it understands power grid management 101 better than the current crop of "managers".