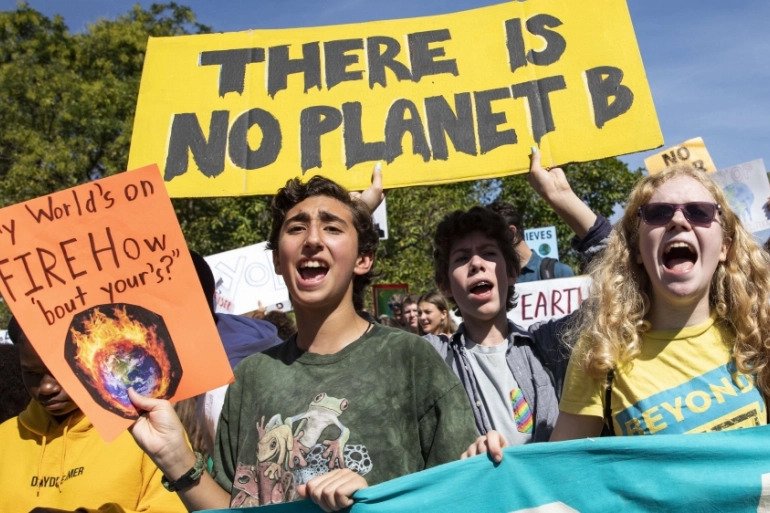 For countries hoping to avoid the worst of climate change, next month’s US  presidential election will be pivotal in determining the course of global climate action, experts say.

A win for the Democratic candidate, Joe Biden, would inject new life into global cooperation in reducing greenhouse gas emissions, according to past climate negotiators reports Al Jazeera.

A second term for President  Trump, on the other hand, could prove more disruptive than his first by emboldening climate-skeptic countries.

“The US needs to get back in the game,” said Kelley Kizzier, a former European Union climate negotiator who now works at the non-profit Environmental Defense Fund.

Paris aggreement
Under the 2015 Paris Agreement, almost 200 countries pledged to work towards limiting global warming to 1.5 Celsius (2.7 Fahrenheit) above pre-industrial levels. That goal has since slipped further away, as climate-warming emissions continued to increase.

A Biden win, experts say, could help put those efforts back on track.

Biden wants to spend $2 trillion over a four-year term towards reaching net-zero emissions by 2050 in the US, currently the number two emitter of greenhouse gases. Committing further to slashing emissions this decade could nudge China and other high-polluting countries to follow suit.

“If the United States, China, and the European Union move in that direction, then I believe we can take the rest of the world along with us,” Frans Timmermans, the EU’s top climate official, said during a Reuters news agency event last week.

Countries have been asked to update their Paris pledges this year. So far only 14 have done so, including Norway, Chile and the tiny Marshall Islands. The 27-country EU plans to upgrade its pledge in December.

United Nations scientists said in a major report last November that without steep emissions cuts by 2030, the world will be unable to prevent catastrophic climate change.

Biden, who would take office in January if he wins the November 3 election, has pledged to immediately rejoin the Paris Treaty. That would oblige Washington to make a fresh emissions-cutting pledge well ahead of the next UN climate summit in November 2021.

“Biden will have to move forward in the early days of the administration,” said John Podesta, a counsellor on climate and energy to former US President Barack Obama who is now an  adviser to Biden.

“Other countries will begin to judge the administration’s level of ambition based on that,” Podesta told Reuters.

While many US states, cities and businesses are already cutting emissions, the country is still falling short on the Obama-era pledge to cut emissions by 26-28 percent by 2025, against 2005 levels.

Trump, who has rejected mainstream science on climate change, has unraveled Obama-era regulations, seeking to free the energy and auto industries from the costs of regulations meant to protect health and the environment

Just had two days of the lowest temperatures ever recorded in Texas. And these idiots want to cry about global warming. All this stuff is made up just to scare people into submission. If these so-called scientists were not here during the ice age, then they have no idea what really happened. What a bunch of hogwash

The desire to stop climate change is not new. In Europe in the middle ages the weather became a disaster. Ash from volcanoes far away and cooling trends combined to make it impossible to grow crops and there was famine. What to do? Who was responsible? The consensus was undeniable. It was witches, and thousands were burned alive. Few dared to raise their hand, even if it was their own mother who was taken away. Did it stop climate change? Well yes, the climate did get better. But they had an excuse. They had no idea about the science of climate. Today the data is there but few are sufficiently educated in science and willing to spend the time reading boring papers and looking at graphs to see that the politically popular theory, like burning witches, is not valid. And a brief but thorough study of the proposed solutions will show they are an ecological and economic disaster. It is time to adopt some humility and realize that the climate of the earth is far beyond our ability to change, no matter how many witches we burn.

Forgot to attach the link to the article https://www.iea.org/articles/global-co2-emissions-in-2019

"The United States saw the largest decline in energy-related CO2 emissions in 2019 on a country basis – a fall of 140 Mt, or 2.9%, to 4.8 Gt. US emissions are now down almost 1 Gt from their peak in the year 2000, the largest absolute decline by any country over that period. A 15% reduction in the use of coal for power generation underpinned the decline in overall US emissions in 2019. Coal-fired power plants faced even stronger competition from natural gas-fired generation, with benchmark gas prices an average of 45% lower than 2018 levels. As a result, gas increased its share in electricity generation to a record high of 37%. Overall electricity demand declined because demand for air-conditioning and heating was lower as a result of milder summer and winter weather." The above quote is from a study published by IAE the International Energy Agency. As coal power plants are transistioned to the now cheap and plentiful natural gas CO2 emissions are in reality dropping in the US inspite of all the rhetoric to the contrary. It goes on to say "Emissions outside advanced economies grew by close to 400 Mt in 2019, with almost 80% of the increase coming from Asia. In this region, coal demand continued to expand, accounting for over 50% of energy use, and is responsible for around 10 Gt of emissions. In China, emissions rose but were tempered by slower economic growth and higher output from low-carbon sources of electricity. Renewables continued to expand in China, and 2019 was also the first full year of operation for seven large-scale nuclear reactors in the country." This is the biggest flaw in the Paris accords, only the top G20 countries are bound by it and they are reducing their emissions while the rest of the world gets a free pass and have more than offset any gains realized.

The belief that a rise in carbon dioxide concentration causes a rise in temperature is not based on observation. There have been previous ice ages where the amount of CO2 in the atmosphere has been much greater than it is now, notably in the Ordovician where it was over 10X greater. Antarctic ice cores showing the four ice ages in the last 500,000 years do show a correlation. It is that CO2 concentration lags rise in temperature by about 800 years. Rise in CO2 is an effect, not a cause, of a rise in temperature. A hot pan can fry an egg but a fried egg cannot heat a pan. These are basic observations that anyone can look up. But it appears there is a group of rich men who are working hard to convince the public that it is not so, that they must be allowed to take control of every aspect of our lives or everyone will die. But the fact that they can hire scientists to say what they want them to say does not make it true. We do not have to give up our liberty to save our lives.