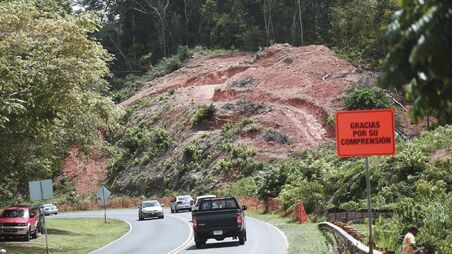 The loss was created by agriculture, logging and construction projects says the center which uses data from Global Forest Watch as a reference.

Darién, where there have been many reports of illegal logging is the most affected province with the loss of  93,500 hectares. Reports from the Ministry of the Environment show that 97% of the wood that has been deforested in Darien is in clear violation of the laws reports La Prensa.

After Darién, comes   Panama province where 51,900 green hectares have disappeared.

Protected areas There are natural parks and protected areas such as the Chagres Natural Park, the Camino de Cruces Park, the protected wetlands of the Bay of Panama and the natural forests of Bayano, where hectares of forests have also been ravaged, even with the permission of public institutions.

CIAM biologist,  Isaías Ramos said that In his opinion, there is no "concrete environmental order", nor any real political will on environmental issues, which goes beyond the signing of international agreements or the photo ops s when politicians plant trees in the country.

According to Ramos, the loss of vegetation is shown in different ways throughout the country. For example, he said that it occurs because of the permissiveness of state entities that allow construction without planning, livestock, agricultural, forestry or mining activities.

Tourism
"There is also high-impact tourism in fragile areas, without contemplating beyond the economic return of the moment and ignoring the consequences of each of these actions on the environment.”,

He stressed that this occurs "in the shadow" of a community that in most cases does not know what is happening, its rights to a healthy environment and the repercussion it will have on future generations.

Susana Serracín, of the Alliance for Conservation and Development,   said  the statistics were “chilling”

"I think it is clear that something is very wrong with environmental authorities and decision makers in the country, who give green light to harmful activities and projects.”

Examples were the extension of the  Omar Torrijos highway avenue, by the Ministry of Public Works,  where 13 hectares were cut down within the Camino de Cruces park,. and deforestation in Darién with little control.

She  also regretted that Panama is a signatory of international agreements such as the Paris  Biodiversity Accord and that there are regulations, referring to wildlife, and others that are now a dead letter. "It's not about stopping development, but we have to have respect for the environment. Not everything is money," she said.

Without a dedicated enforcement team, the illegal logging will continue apace.

I would hardly blame tourism, an industry poorly understood, supported, or leveraged by successive government administrations. There are plenty of well-educated, professionally prepared people in Panama who have had neither consistent support or continuity of national policy on tourism; but there is a focus on sustainable tourism, and we sincerely hope that the Cortizo administration gets behind not only supporting them, but also establishing an autonomous tourism administration (like Puerto Rico's Tourism Company, that works with, but is not controlled by, the government) to assure continuity of developmental vision and efforts to grow this sector of the national economy. The wanton exploitation of land here, like any other country with a dodgy record of environmental protection, is driven by wanton greed. After living in this country for 10 years, and following the news about government corruption, lack of accountability, cavalier and condescending attitudes, and impunity, its easy to connect the dots and know why these things have gotten out of control. Again, we hope that the Cortizo administration honors the will of its citizens and puts a stop-check on the rampant corruption we have suffered from. Panama is the patrimony of its youth, its future depends on their education. They should not yield that future to the crooked dinosaurs who have heretofore run roughshod over law and order. I hope the story has a happy ending for Panama and sustainable business development.