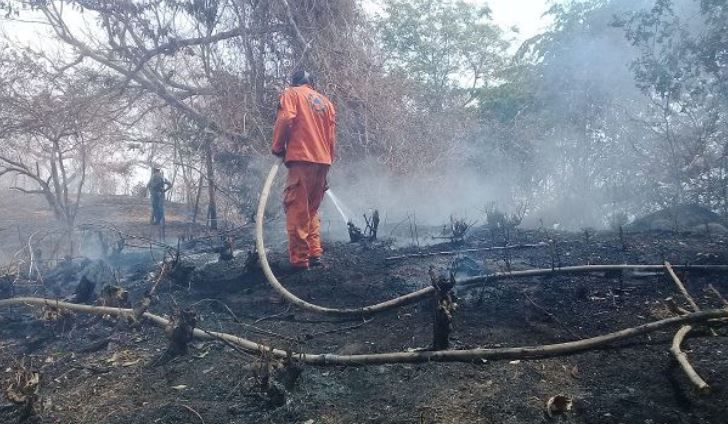 Education rather than reaction is the strategy of Panama’s  Environment Ministry. Miambiente to reduce forest fires in Azuero this year after at least 3.498 hectares of plant mass were destroyed in 2019.

The district of Ocú, in the province of Herrera, was the most affected with a total of 20 fires. mass.

Helvecia Bonilla, head of Miambiente’s Department of Environmental Disasters, said that every summer the vegetation supports these fires.

Bonilla said that according to calculations of the Department of Hydrometeorology of the Electricity Transmission Company the amount of rainfall last year was reduced between 30% and 40%.

Based on that, the severity of the fires for this year will be high, Bonilla said and they have begun to prepare much better than in other years.

Statistics indicate that last year across Panama, 74,830 hectares of burned plant mass was reported in 1,177 events. and 58 were in protected areas.

"Only education generates environmental awareness" is the motto that will be used this year in the Miambiente campaign in the region, she said.

In Herrera and other regions of the country, drones will be used to identify critical areas.

Education sounds like a very single pronged approach. Worldwide, education has indicated that reforestation is helpful, but what's the point of learning that if you're not going to do anything about it? Drones can identify fires early, and maybe even see who starts them, but with no follow thru, that is also useless. Panama's solutions so very often sound like another rearrangement of the Titanic's deck chairs. The only way to do something, is to actually do it!

Huge fines work but you need the balls to levy them

Education changes behavior when it is paired with high-profile enforcement. Alone, it doesn't have much effect.

Education changes behavior when it is paired with high-profile enforcement. Alone, it doesn't have much effect.