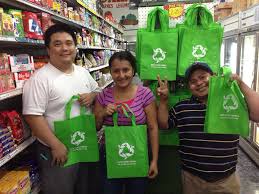 Panama continues to combat the use of plastic bags and on January 20, the second phase of Law 1 of January 19, 2018, which includes supermarkets, pharmacies, and wholesalers, will operate. The National Director of Environmental Verification, Miguel Flores, explained that, since the implementation of the regulations, through the l Customs Authority, there was  a 54% reduction off of plastic bags entering Panama

From January 20, when the law begins to govern, the Consumer Protection and Authority (Acodeco), will verify that businesses comply with the rules said Gabriel Pérez of the verification department. Between July and December, last year fines of $11,400  were, applied for breach of the rule, where the main lack of the declaration of the cost of bags. In addition to the certificate of conformity, which specifies that the bags do not have polyethylene. Supermarkets do not profit from the sale, Panama was the first country in the region to implement regulations to prohibit the use of plastic bags and now Costa Rica has followed suit.

Supermarkets have never stopped using plastic bags. They still wrap meats in plastic - layers of plastic; and still supply plastic bags for fruits and veggies, and at Riba the clerks in the veggie/fruit areas still put foods in plastic unless you stop them.