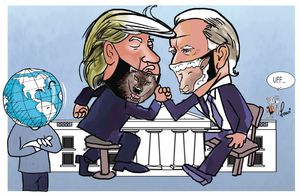 Business
359Views 18Comments Posted 22/10/2020
Share
Millions of viwers  around the world will be tuned into the final debate between President Trump. fighting to regain ground against presidential contender, former Vice President Joe Biden.  The first debate was marred by Trump's constant interruptions while his challenger was speaking. Tonight the mikes will be muted. Scores of millions of Americans have already voted and the debate may be too little too late for the President
Share

Gordo, you know that "deep state" humpty is always talking about.....that is who has fabricated this october surprise. Complete BS!! Only fools like you and republicans believe it. Radcliffe is a partisan joke who is so far up trump's butt, he can't breathe anymore. The right wing are so desparate to retain power that they will do anything to try to achieve it. But america is changing. People are voting in numbers never seen before....meaning the repubs lose. So as you salivate about the orange dotard completing another conjob, prepare yourself for the fat slob being carted off in his specially fitted orange jumpsuit. The insanity that is trump's base are truly the deplorables Clinton talked about. Look at the proud boys, the militias, the poll videotaping and quite simply the insane rallies in the midst of a pandemic. Humpty is insane and he has infected his base with the same virus of insanity that will kill many more. Believe it!!

Lee Moran·Reporter, HuffPost Thu, October 22, 2020, 1:55 AM EST Donald Trump will end his presidency just as he began it, longtime conservative commentator George Will predicted in his new column for The Washington Post. And that is by whining. Trump is “a practitioner of crybaby conservatism,” Will wrote in the column published Wednesday. “His presidency that began with a wallow in self-pity probably will end in ignominy when he slinks away pouting, trailing clouds of recriminations, without a trace of John McCain’s graciousness on election night 2008,” he added.

Gordo. You're jumping to conclusions again. Nothing has been confirmed yet. That's why no legitimate news outlet has reported on it yet. The FBI hasn't released anything. Keep dreaming. If the Bidens are guilty, they surely need to face the consequences. The only thing for sure is the SDNY is compiling lots of info on El Duce and he is prison bound as soon as he looses.

Biden's covid policy = plexiglass and masks for all. LOL Yeah right good one Joe! Meanwhile half of U.S. covid deaths came from nursing homes where covid patients were intentionally put there by Democrat governors... No it's Trump's fault say the dems. How idiotic! Biden's downfall will be higher taxes, shutting down economy over covid, killing oil and gas industry, socializing medicine, etc. The entire dem platform is a dystopian nightmare.

LOL funny how you crazies have been lobotomized by fake news and will never realize it. Big man Joe and the Biden crime family syndicate have been exposed by the 'laptop from hell'. Corroborated to be authentic by FBI, intelligence and ex- partners and recipients of emails found on the hard drive. Contains all the pay for play schemes with China, Ukraine, Russia, etc. by the Biden family. Plus child porn and torture. Fake news has a complete blackout of this story but you will see stories trickle out on real news and foreign unbiased sources. Even Piers Morgan a liberal Trump hater is appalled at the main stream news censorship of this important Biden corruption story. More damning evidence will be released heading into election day. Stay tuned!

I watched the debate and saw a flailing semi-coherent soon-to-be ex -president. Biden wasn't perfect, but he didn't need to be. Trump is his own worst enemy, with 4 years of chaos and failings to be judged by right thinking people. And with the amount of money behind humpty(koch et al) I am sure that, in their desperation to retain power, because of their loser candidate, the "october surprise" has been painstakingly manufactured by the power brokers. Nothing is out of bounds because I know one immutable fact....there is a portion of white right wing america that will believe anything. The extreme fear they have as they watch america changing right before their eyes.....it drives them to do whatever it takes to capitalize on the ignorance of so many in the country. It appears though that the "surprise" is that the majority of americans are not listening. But fox news and the repubs will flail away at this dead horse over the next 11 days like they always do......leading to further chaos and potentially theft of the election. Chaos, american style, is assured.....trump's only way of staying in power and out of prison. "The world's most dangerous man"!!

The only thing El Duce crushed was the truth. This pathetic old man lies like a rug. He has no plans for a second term, never has. He just likes to dance to the Village People and their gay pride songs. What a clueless dipwad.

Looks like Trump is going to pull it out again. A material witness has appeared in the Biden crime family case. Perfect timing.

Wow....what dramatics. China taking over everybody's lifes???? I think you're over estimating their influence and capabilities. But, I'm so relieved that brave men like you will be on the front lines when the time comes. Or will you be like El Duce and claim bone spurs and scurry away like the sniveling, whining coward he really is. All vine no taters bub.

Wow the Looney lefties have escaped the asylum here. It's either Trump or CCP who own the dems so it's not a matter liking Trump but not wanting CCP to control America. So I'll take Trump any day over a commie scum dem who will take away our freedoms and control every aspect of our lives.

What a fun cartoon. Dows anyone really believe Trump can win an arm-wrestling match, when he cannot even drink a glass of water with only one hand. I guess he can dream, no?

Old corrupt white men have ruled the US since it's inception. They made the rules for them and haven't given up control yet. Maybe someday elections will have acceptable candidates. Hasn't happened in my life time. Everything is bought and paid for in advance.

I'm not a lefty or righty. Been a registered independent all my life. I vote the man, not the party. I've followed El Duce for over 30 years and he's always been a clown. Still is. You need to check your brainwashed meter my friend.

When the moderators are known Democrats it is not an impartial debate. That's the rigging aspect of it but leftists like casual o don't acknowledge facts unless they support their own false beliefs.

Rigged!!! Everything is rigged!!! Good grief. El Duce is a pathological liar and the originator of fake news. He's just pissed because he'll get hit with the MUTE button after 2 mins. of his tirades.

Another rigged debate. Trump has to debate the moderator and Biden. 2 on 1. What a disgusting farce and clown show. Fake news mass media are controlled by Dems.