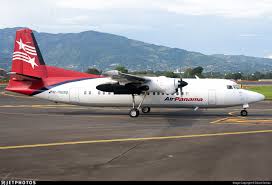 Over 00 passengers, on  the Panama-David-Bocas del Toro route , and vice versa, were stranded on Saturday, October 5, following  an order of the Civil Aeronautical Authority (AAC) for the temporary suspension of Air Panama  flights.

The AAC decided to suspend the fleet of Fokker 50 aircraft of Air Panama serving  the route, after a regulatory investigation, although it did not offer further details. reports La Prensa.

Representatives of Air Panama ,  described the AAC measure as "uncompromising and resounding," because they said, "it is definitely affecting the entire country."

"The measure they have taken is too extreme and could have been done differently," a company spokesperson told La Prensa.

The Panamanian company has three Fokker 50 planes that offer daily service between Panama City and the provinces of Chiriquí and Bocas del Toro.

The company's executives were meeting  on with AAC officials on Saturday  to try to reach an agreement.

Air Panama is the only airline that travels to Bocas del Toro and the flights  affect tourism in the province that is currently in low season.

Passengers who were stranded in Bocas del Toro only have the alternative of traveling by bus that takes approximately 8 hours to David and 12 hours to Panama.

On September 5, a Fokker 50 aircraft of Air Panama suffered a mechanical damage in flight and had to  make an emergency at 4:01 pm, at Panama Pacifico International Airport.

Screw Air Panama they are charging to much for flights The routes need other airlines Copa should be a carrier.

So how are travellers supposed to arrange their international flights when there is no news, no notice nor suggestion about the service of Air Panama in the next few days. I have family here from Europe and Australia, some waited up to 6 hours for the flight to Bocas. People save and pay for their vacation and they do not appreciate spending it in the Airport lounge. No direct advice was given. We may fly, maybe not , at this time, but then it was delayed once or twice. Will they get a refund? This will kill tourism in Bocas... but do they care?