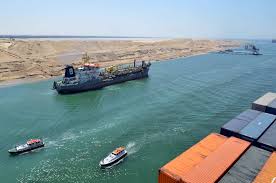 The revenue of the Suez Canal, one of the routes that compete with the Panama Canal, reached $497.1 million in January, up by 6.1% over  the same month last year, said Osama Rabie, president of the Suez Canal Authority

Suez is one of the main sources of national income and foreign exchange reserves in Egypt, in addition to tourism and foreign investment, two sectors that have suffered a decline in the last two years.

Around 12% of the volume of world trade passes through the Suez Canal, one of the communication routes that connect Africa, Asia, and Europe to join the Red Sea and the Mediterranean Sea. Last year, 18,800 ships went through Suez, a figure that increased 3.9% compared to the previous year. 1,030 million tons of goods were transported a growth of 4.9%.