Pressures on Panama to cool relations with China not effective - Ambassador 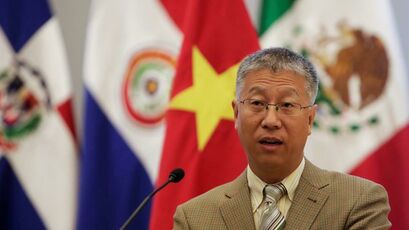 Pressures  on Panama by  a "great power"  to cool relations with China are not working   said China’s  ambassador to Panama, Wei Qiang, on Tuesday, September 10

"I feel that there are (pressures), but both China and Panama are sovereign, independent countries, we are mature nations, capable of making our own diplomatic decisions," Wei told local media.

Although the diplomat did not expressly mention that the "pressures" come from the United States, he did say that the recent statements against China of a White House adviser during a recent  visit to Panama were "degrading and unfounded."

"One turns on the television and important gentlemen of some great world power appear ... I do not understand why being such a powerful country they speak against bilateral relations between two independent, sovereign countries," said Wei.

"They are relationships that are not doing or have the least interest in harming third parties," he added.

The director of the US National Council For the Western Hemisphere, Mauricio Claver-Carone, met last August with Panamanian President Laurentino Cortizo , and during an interview with TVN News said that "Chinese investments are a lot of foam and little chocolate" and that the Asian giant just wants to "use" Panama because of its geographical position.

It is not the first time that a senior US official attacks the growing presence of China in Panama reports TVN  Already in October of last year the US Secretary of State, Mike Pompeo, asked Panama to "keep eyes open " with China.

Panama, a historical ally of the United States, in June 2017, became the second Central American country after Costa Rica (2007), to establish diplomatic relations with China.

China already had an important presence in Panama before the establishment of relations, as it is the leading t provider of the Colon Free Zone (the largest in the continent) and the third user, behind the United States and Japan, of the interoceanic canal, through which  passes 6% of world trade.

However, since the new relationships, Chinese companies have won billionaire contracts, such as a cruise terminal and the fourth bridge over the canal.

The previous government began negotiating a free trade agreement (FTA) with China, but it did not conclude and left the task to the Cortizo Administration, which took office last July and has not yet said  when they will resume conversations

The ambassador denied that the relationship with this government is more distant than with the previous one and assured that "we are working normally to consider the next steps to take" in the FTA negotiations.

Panama | Russian Invasion Trojan Horse Russia does this easily with their announcement of a Peace Keeping Mission. Russia / China creates opportunities by creating a riot of discontent among Panamanians. China will state it has a national security interest. Russia will have the military of Cuba take control of the government. Cuba will run Panama government through a forced dictator election. Russia will than be invited as Peace Keeping Mission! Venezuela loss of job industry and hyper inflation led to the starvation crises. What happened in Venezuela will certainly happen to Panama unless.. the issue is addressed by nations collecting their own data base collection on the Panama situation.

An alliance between Russia and China in the Western Hemisphere is some strategically scary shit. Given Panama's close proximity to the US and it's territories in the Caribbean. Very simply put, is it possible for the Chinese to use a commercial freighter to move a battalion size element of the Chinese or Russian army into Panama with the effect of the "Trojan Horse"? If they own the Canal and the port and container facilities, what would be able to stop them? I don't think the Panamanian President realizes how a possible scenario like this can surely jeopardize the peace and tranquility of the entire country. Especially if it comes down to China restricting US maritime activity. Just a thought.

Panama | The Russian / China Menace Facts of The Russian / China Menace: 1. Russia Cuban missile crises...Kennedy era. 2. Russia / Cuba mysterious brain injury to U.S. diplomats at embassy. 3. Russia political interference in U.S. political campaigns. 4. Russia nuclear hypersonic tipped missiles suffers major reactor damage as it attempts to develop weapons to destroy the United States. 5. Russia aligns with China in a clandestine operation to militarize areas of Panama in the future. 6. Russia in close range contact with China between Cuba and Panama...headquarters / embassies. 7. Russia and China have data base collection from Panama. 8. Russia and China have cooperative agreements for advance weaponry production. 9. Russia and China suffers political riots from dissatisfied protesters from their government. 10. China wants total control of the global economy has met with economic decline as a result of its refusal for a fair and reciprocal trade agreement, has met to unify with Russia.

Panama | The China Threat To Panama Panama has always been very close to China dating back to its history. Panama Chinese citizens has been a well established culture. Panama Chinese canal workers in the containment business has been invaluable. For this, and many other reasons, Panama finds it is very difficult to see China as a threat. China never gave Panama any notion of ever colonizing Panama...but the Chinese restaurants? China has some of the best cuisines and are masters proficient in this industry. Chinese are very friendly and eager to help in any way they can. Panama has the difficult challenge of accepting the facts of China's global agenda using geopolitical influence and deception. Panama government also has the task of keeping its citizens employed. Panama National Assembly also pressures the president for significant employment. This means, the high debt cost of providing temporary construction jobs of $billions. China advantage (now) as the third major user of the Panama canals with its high profit revenues can afford to finance Panama construction projects and basically control the economy. China major bank recently established in Panama is now at the stage with diplomatic legal agreements ready to buy businesses, finance large construction projects, work with Panama's / U.S. currency and even control elections through candidate financial aid. China at this point has tremendous clout and influence in Panama's politics and economy. Panama does not have many alternative as any foreign national bank would require immense security and financing. China has been well established with Panama with its cuisine, culture and hospitality. Example: Panama hotel industry is at 50% capacity or lower. Panama tourism industry has to increase advertising revenues for their hotel industry. China can easily bring the revenue profits to Panama but the risk is allowing greater Visas to China with more Chinese restaurants and Chinese hotels. In other words, sure China will help but you know, I have a few friends I like to bring over. Oh by the way, Panamanians have to move to the poor sections to make room for the rich. China rich in lavish hotels, mansions and resorts contributing to the National Assembly. Panama uneducated and living on minimum wage with lack of medicines and $100 /month from the government to support the retirees with a broken Social Security system. Panama swayed to have their ham for the Christmas holidays with Chinese culture and cuisine. Panama has a very, very...difficult challenge.