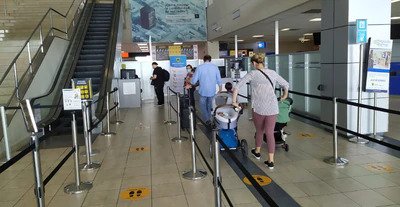 The Panama  Government has authorized a controlled operations center for the interconnection of international commercial flights.

It will allow - to a limited extent - air operations for transit through the Tocumen international airport for the departure of passengers and the controlled entry of Panamanians or residents of Panama.

The establishment of the center was announced in an Executive Decree on  July 31, is signed by President  Laurentino Cortizo, and the Minister of Government, Janaina Tewaney Mencomo.

Only passengers established by April 30 Decree will be allowed to leave the country  and passengers will be admitted to the Tocumen airport to only  a limited extent, in terms of number and connections, "provided that their  connections do exceed  six hours between arrival and departure."

The controlled entry of passengers into national territory will be allowed,  only with prior authorization from the health authority.

The Ministry of Health (Minsa) will authorize or deny the entry into the country of each flight, taking into account the level of spread of the Covid-19 in the country, the epidemiological status of the country of embarkation, the number of passengers and their health condition, says a  Ministry statement.

flights that are part of the controlled operation of the center must be presented and communicated by the air operators to the Civil Aeronautical Authority.

"Every Panamanian and resident foreigner who enters the national territory through these flights must submit to the sanitary and biosafety protocols established by the Minsa", says the decree.

Jesus is coming soon. You will not escape in Panama or the US. Every knee will bow.

So sorry to disappoint you So-called Dr Martin. I am not interested in any politics, Panama, Canada or USA....I could not care less. Am a 78 year young Canadian and plan on living to 100. Lying for Cortizo? Why would I even thing of doing that? You must be a Shtrump fan.

Kim, stevemcbuck, catch 3467, and Zred5151 ( he did the biggest lie). You guys are all paid by the Regime. We have here clear numbers and guys believe me they come out. Panama is now close to the downfall and the extension not to let the construction workers do their work it will only boost my prediction. By lying for Cortizo you will not make Panama alive. Russian style reactions here !

Burst your balloon Dr. Martin, some Canadians and Americans are interested in coming back. Also, some of us already in lockdown here, prefer staying here than facing what is going on everywhere else, thank you very much. Small price to pay for continuing to live, no ?

I am canadian and a resident of Panama, I have been stuck in Canada since March 27th when my flight was cancelled... I really want to get back home to Anton,Cocle

We are US citizens & residents of Panama.. Currently in the US & very anxious to get back home to Panama.

Cortizo are you still normal? None of the foreigners ever come back to your dictatorship. What are you smoking sorry forgot you are very calm!? It's over and out for Panama. As a doctor nobody wants to go in one of these catastrophic hospitals in Panama. To go there it's a real life treatning risk. Look at the death numbers. Blown up with ventilators that's the way they treat sick patients.