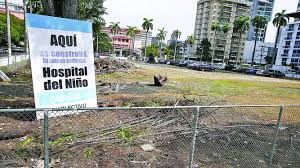 AFTER a 15-year hiatus a new Children’s Hospital is close to getting a green light says Panama Minister of Health, Rosario Turner.

The  $614 million Hospital del Niño includes a new maternity wing for Hospital Santo Tomas. It will be built on the former site of the US Embassy  on Ave Balboa

Turner reported that the Third Chamber of the Supreme Court did not admit an appeal of illegality against the public act of bidding for the construction of the hospital and the Ministry (MinsaI can proceed to the award of the contract to the favored company.

"This last claim put by the Chinese-Turkish consortium had to go to the Supreme Court  and  was not  admitted.”

The director of the Hospital del Niño, Paúl Gallardo said "We are very happy with the news, it seems that soon the construction of the hospital will begin It has been  an urgent need for 15 years"  The old structure is overcrowded and with insufficient beds to cope with the city’s expanding population.