More lives at risk on cruise ship  after leaving Panama 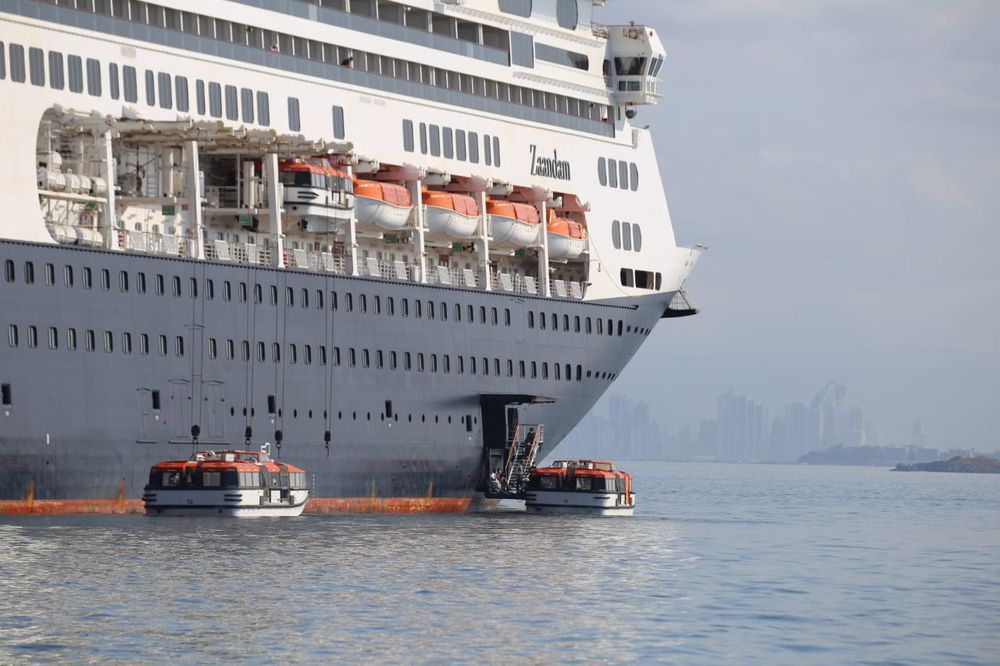 Transfer operations between the two ships in the Bay of Panama.

More lives are at risk on the  Holland America Line cruise ships and Zaandam which transited the Panama Canal with two pilots as a humanitarian gesture from Panama authorities on Monday, March 30.

The two ships 1,243 passengers and 1,247 crew carry four deceased passengers and dozens of patients with apparent coronavirus, warned Tuesday that more people could die if they are not authorized to dock in the US state of Florida.

"Four passengers have already died and I fear more lives are at risk," Orlando Ashford, president of Holland America, wrote in an open letter to Florida newspaper Sun-Sentinel.

"As of March 30, 76 Zaandam passengers and 117 crew members had flu-like illnesses, including eight that tested positive for Covid-19," he added.

The Zaandam which had been refused entry to ports on the Pacific Coast before anchoring in the Bay of Panama,  and the  Rotterdam, which was deployed from San Diego to deliver supplies to the beleaguered vessel and separate passengers between the two ships, two ships, had hopes of docking Thursday in Fort Lauderdale, 50 km north of Miami.

But Fort Lauderdale authorities reject the idea, and Florida Governor Ron DeSantis said Monday he did not want contaminated people on ships to be " dumped " in this southeastern state and instead offered to send medical personnel.

His main argument is that Miami and Broward counties, have  60% of the state's more than 5,000 cases of coronavirus and need hospital teams to care for their residents.

The state cannot allow "non-Florida people to be dumped here in South Florida to use our precious resources," DeSantis said.

Port authorities wrote Tuesday that they are working with Holland America to design an action plan.

"The ship will not be able to enter US waters until the plan is delivered and approved. Our priority is to ensure the safety of the local community, passengers and crew, " Port Everglades reported in a statement.

Zaandam had planned to finish its route in Fort Lauderdale on April 7, but now it and Rotterdam are sailing through the Caribbean without a safe

"We are dealing with a 'it's not my problem' syndrome. The international community, consistently generous and helpful in the face of human suffering, closed Zaandam and left it to its own devices, "Ashford wrote.

Zaandam set sail from Buenos Aires on March 7 with about 1,800 people of multiple nationalities including  US   French and 250 Canadians destined for San Antonio, on the central coast of Chile.

Since then it has sailed like the legendary Flying Dutchman seeking a port.

President Donald Trump won’t shut down travel from America’s coronavirus epicenters, so governors are doing it themselves — citing the White House as inspiration and bracing for constitutional challenges.

No. the incompetent trump and his sycophant Florida Governor De Santis gave cruise lines the go ahead .This is on them. Trump said. April 1st the virus would be gone.

No. the incompetent trump and his sycophant Florida Governor De Santis gave cruise lines the go ahead .This is on them. Trump said. April 1st the virus would be gone.

Send it back where it started from . The people started this after the virus problem had started .stupid people booking a cheap trip this late in the yr and a money hunger shio line