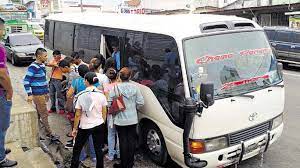 Representatives of transportation groups met with the director of the Land Transit and Transportation Authority (ATTT) , Carlos Ordoñez, on Friday, September 30, to address the problem of piracy that

has been affecting carriers for several years, both in the city and in the provinces.

Ordoñez assured that they have carried out operations in the eastern area of ​​the province of Panama, in Panama Oeste, and in the province of Coclé. In addition, they have identified this activity in the area of ​​5 de Mayo and the National Institute, while in La Chorrera it occurs in Feuillet Park.

He said that they are identifying the places where there is a high demand for illegal transport, in order to carry out the operations and apply the sanctions allowed by the Law.

A second meeting was held with the school bus drivers who also complain that there are drivers transporting students without the proper operating permits.

Ordoñez said that on October 11 the technical dialogue table with the transport sector will be resumed to address the situation of the digital platforms that offer the transport service in the country.

In the past, there have been protests and demonstrations by selective and tourism carriers, who denounce unfair competition by digital platforms, since,  they do not pay the taxes that they must pay to be able to provide the service.