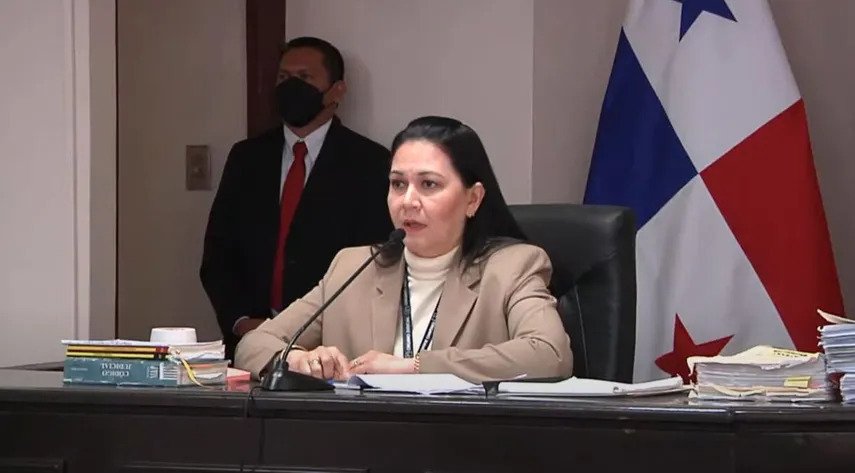 Judge Baloisa Marquínez will accept the term of the Law to give her ruling on the hearing of former President Ricardo Martinelli for the New Business Case, after having heard the allegations of the prosecutor Uris Vargas and the defense attorney Luis Eduardo Camacho for two hours on Tuesday, November 29 at the preliminary hearing following a 5-year  investigation of the Public Ministry of alleged money laundering.

The hearing began in January of this year, but Martinelli did not participate because he enjoyed electoral criminal jurisdiction, so until now, after the appeal to trial was made to the other defendants.

Judge Baloisa Marquínez began the hearing by clarifying to the defense attorney Luis Eduardo Camacho Jr., who has also represented him in other criminal cases. that on this occasion there is no room for incidents because it is a continuation of the hearing, but he could file his incidents once the prosecution finished with its presentation.

The reading of the tax hearing was carried out by prosecutor Uris Vargas, who ratified the tax hearing presented by the First Specialized Prosecutor against Organized Crime against the former president, in which the trial was requested.

He pointed out that the actions of the former president comply with the phases required by the commission of the crime of money laundering.

Among the witnesses, there are two employees of the FCC company, Mike Btesh, Ramón Carretero, and the late Felipe 'Pipo' Virzi, who gave an account of the previous contract that Martinelli made in order to obtain the amount he needed for the purchase of Editora Panamá América SA (Epasa).

The placement phase took place after the approach with the contractors, who later benefited from contracts and addendums.

Urbis detailed some of the contracts from which these companies benefited, including the Design and Construction for the rehabilitation of the widening of the Arraiján-La Chorrera Highway.

He indicated that the money paid by the MEF was stratified through public limited companies and ultimately ended up in the basket account of New Business Serving Service LTD.

Financial Pacific INC provided 2 million dollars to the New Business Serving Service LTD account, violating stock market regulations since it was not legally authorized to make these contracts and the origin of the funds is doubtful.

"This stratification process demonstrates the traceability of money of illicit origin that was intended to appear legal, because that is money laundering, dirty money from crimes," said Vargas.

Once the funds were obtained, the newspaper Epasa was purchased, and the company TPAHC INC was created with the purpose of managing the shares of Epasa, where it is certified that 60% of the shares have the final control of former President Martinelli and the rest belongs to Henry Mizrachi.

The prosecution supported the way in which Martinelli contacted the Panamanian State contractors to be able to conclude the purchase of Epasa, in addition, he gave instructions to give and place the sum of $3 million dollars it came from the payment of a contract with the State.

They add that Martinelli contributed $11.450 million through the company Ricamar Financial Company, INC; to the account of New Business Serving Service SA, in addition, he disposed of the first payment required in the contract for the purchase-sale of Epasa for an amount of $5 million

During the reading of the tax hearing, Vargas summarized the inquiries with some collaborators who have accepted their participation in the plot, where they link the benefited contractors and the way in which they were contacted by the former president.

Camacho began by referring to the Effective Collaboration Law, which, according to him, has been used to extort, coerce witnesses, ensuring that he will demonstrate how the alleged witnesses and collaborators contradict each other.

He described the file of the Public Prosecutor's Office as armed “riots” on the basis of people who went from being accused and leaving the case.

"I do not share the illegal criteria, for me, here is a meeting of merchants that took place to provide funds for the acquisition of a medium," he said.

He said that there are clear things that demonstrate the lack of objectivity of the Public Ministry, which is used to criminally prosecute a person for political situations.

He pointed out that the Public Ministry carried out investigations against Martinelli, when he was still a deputy of the Central American Parliament (Parlacen) , since this could only be done by the Supreme Court of Justice , for which reason he requested the definitive dismissal.

He stressed that he will demonstrate that there is no full proof of the existence of the punishable act, nor does it prove that he is linked to the crime for which he was charged.

He added that the funds contributed by Martinelli for the purchase of the newspaper were not illegal because they came from his pecuniary, which was documented in his declaration of assets at the time he entered the Presidency of the Republic and the Public Ministry never said that this money was illegal because they are not.

He stressed that Martinelli did not simulate operations, nor did he hide the origin of the money because it came from his commercial activities.

He continued giving his reasons why, in his opinion, there could not have been a crime in the transactions carried out for the purchase of Epasa, until culminating with his intervention reiterating his request for the definitive dismissal Martinelli.

The superior prosecutor Emeldo Márquez , pointed out that the contributions made by former President Martinelli will be discussed at the hearing of funds, indicating that the theory of the case of the Public Ministry is based on the request to contractors of 10% of each of the contracts awarded. for the purchase of Epasa.