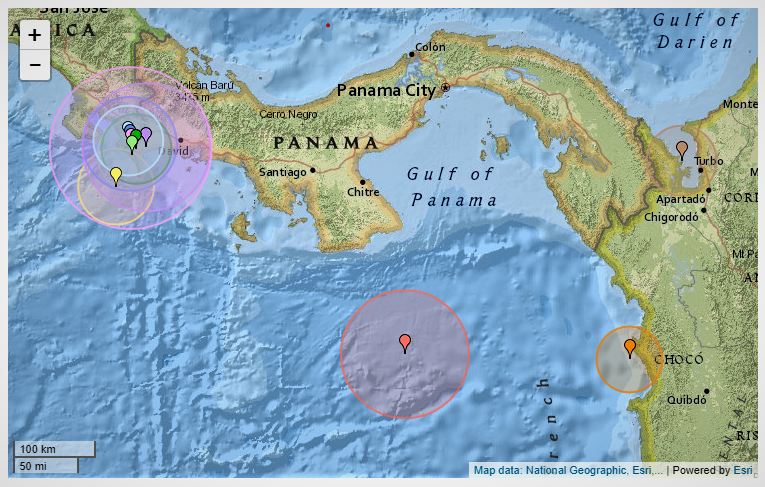 The geologist Efraín Miranda contacted the National Civil Protection System (Sinaproc ) on Wednesday, September 9  to share his observations on recent seismic movements in the Chiriqui region and the need to prepare for earthquakes in the province reports TVN.

I agree with the other commentators here regarding the shoddy construction. Our building is also considered newer and we have nothing but problems. We are only on the 7th floor but water pressure is terrible. We also have had to replace floor tiles and a cracked window that we were told was from normal settling of the building. The concrete has been cracking and getting worse in the 6 years that we have lived here. You can even see some of the rebar exposed and rusting in the salt air which leaves an ugly stain down the exterior. We listed the Apartment for sale in 2017 and have reduced the price twice but no offers and very few lookers. Now with this virus collapse we know it's ours forever! If an earthquake hits this building will be severely damaged but hopefully won't pancake as described by others. Our advice is never buy anything in Panama just rent because this place is overbuilt and there are very few buyers. Hard lessons learned.

I hope to be free of here before the big shaker hits. My building is less than 10 years old but already has stress cracks in the weak concrete. Most of us have had to replace cracked floor tiles and repair splitting drywall from the shitty construction. Past 3 years the fire alarm goes off for no reason at odd hours and we all have to evacuate until fireman give the all clear. This happened in April and we all poured out and the idiot police were yelling get inside. Strangly the alarms no longer go off and everyone says the bomberos turned off the alarms to keep us from congregating outside. So almost no chance of dying from the kung flu but our entire building population will burn to death. How's that for logic?

I believe last quake near the city was from the Pedro Miguel fault and was in 1621. Depending on how long you intend to remain in the country I guess it’s not bad odds and you can stop worrying...but if you are one of those fateful kind then I suggest you live with it. Californians seem to cope.

Yes Jack the goverment spends millions on Carnival and well they should. The average person in Panama does not have the money to travel for a holiday so this is a big deal to them. As far as tickets being handed out for example speeding that is a self imposed tax and since you mentioned DUI I am going to guess your a drunk and got caught driving. Your lucky i am not in charge of the police or drunks would get 1 in the head and they would no longer be a problem

Unfortunately much of the metro system is built on elevated tracks that will likely tumble along with the super out dated CSS Hospital in PC so less medical services would be available when it would be needed the most but hey the Pan Government has their priorities and spends millions on Carnival every year only to stand by as countless under-aged girls get impregnated and thousands of DUI's and traffic tickets are handed out.

Hey guys what about the new metro is it being built correctly or will people be buried alive? I used to ride it but not anymore.

Excellent point. My brother in law worked some of that construction and said that after inspections some steel rebar would be pulled before the concrete was poured and then saved for the next project. Ticking time bomb is what it is!

The massive fault that lies under Panama city should be of greater concern. If that blows then all the shoddy contruction of theclast 15 years is coming down. Each floor of these high rises will pancake onto the next. Building with minimal steel, shoddy chinese steel and concrete made from beach sand will create carnage and death the likes of which have not been seen. Body sniffing dogs is what Panama should be investing in.