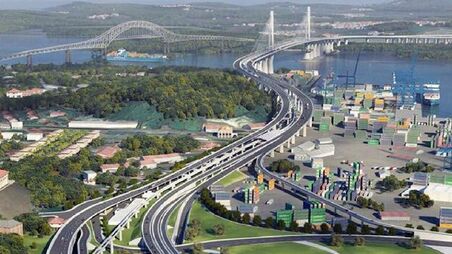 The consortium tasked with building the fourth bridge across the Panama Canal will be called to the National Assembly to help clear the fog surrounding the $1.4 billion project.

Kayra Harding president of the Assembly’s  Public Infrastructure and Channel Affairs Committee of the National Assembly,, confirmed that this week they would be citing the consortium to explain the current situation.

According to Harding, , she will first present the citation proposal to her colleagues in the commission for endorsement. The idea of ​​the citation, she said, is " among other topics,to  explain the start date of the work and the reason for the delays."

On August 14, the National Budget Director of the Ministry of Economy and Finance (MEF) , Carlos González Miranda, told in the Budget Committee that due to the delays in the construction of the road infrastructure of the bridge the budget item for this work will be used in other state projects. and the MEF asked the Budget Committee to approve a transfer of funds that had been allocated in the general budget.

Later the same day, Public Works Minister Rafael Sabonge said that the work will begin this year and even anticipated that it would be in approximately 30 days.

According to Sabonge, this work presented a low execution rate and the contractor, Consorcio Panamá Cuarto Puente, "is working with the $67 million advance payment that was provided, and  reaffirmed that it will begin to be built this year."

"....will be used in other projects..." that sound completely illegal for me and remembers me self service of the GOV. Stop it and use it for the bridge. Start with the work. The bridge will still do his work in 50 years. This GOV is history in 4years plus the rest. Dear GOV: start learning that you are for the people and not the people or the money of the people is for you.