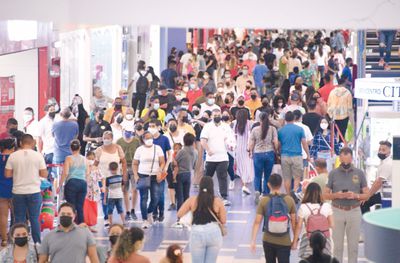 The recovery of the consumer confidence index, and the 43.3% increase in the import of goods, has prompted Panama’s Chamber of Commerce, Industries and Agriculture (CCIAP) to spearhead a campaign that seeks to encourage consumption and sales in local shops that generate employment in the country.

With the slogan "This Business is Panama, Buy Local", the president of the union, José Ramón Icaza, says that they seek to encourage the recovery of the commercial sector, especially mass consumption, during the busiest month of the year.

"If local commerce is supported, the reactivation of jobs and the generation of new jobs is promoted."

He argued that with thecampaign they also want to support artisans and entrepreneurs; as well as the micro, small and medium-sized companies that generate a lot of employment. Some 31 companies are participating in the program and although it was conceived for this month, Icaza indicated that they are analyzing extending it to other months given the acceptance they have had.

Icaza  added that with the vaccination results, the development of the commercial sector for 2022 has favorable prospects, but they are concerned about the impact rising freight rates may have on the tertiary sector and on the prices of imported products.

Panama: Home Country Made Panama Cars. Excellent start because of the many assembly parts. A vehicle dedicated for roads, terrain fishing and camping. There is plenty of room for that and the vehicle would be... available for tourists to rent and enjoy their adventures. Vehicles for fisherman to store a variety of fish in a cooler designed especially with a Panama vehicle. A vehicle designed to accept a certain crash test in certain areas of Panama and other accident factors. Specific vehicles will reduce cost over all rather than incorporate all accident factors. Example... tourists will travel in certain destination at a certain speed. Why not have a vehicle specific for that speed limit with wheels that accommodate certain terrains with automatic adjustments! Panama would have a patent on all their specific vehicle for specific needs. Obviously... it will not be a fancy jeep or hot rod but an enjoyable driving experience. When the Panama National Assembly and Electoral Tribune are done with their plot to take the Panama Canal Expansion... at least Panama will have their own industry to survive on and no one in the world will say Panamanians are dumb and uneducated! Now, the world knows and will pursue this endeavor and get ahead of Panama and claim it as their own. This is just a simple idea and yet the potential is there for a highly lucrative business operation. Caveat... Italian government regime will control this venture if... Panamanians let them take their ideas and capital. Beware of the deceptive plots against the Panamanians to control this beautiful industry!

Ok goverment please put out a list of what Panama makes that you would like us to buy other than the known products like pineapple, rice and chicken and the poison GMO corn growing everywhere

So Panama imports a bunch of cheap chinese shit then encourages their lockdown impoverished population to waste what little money they have left on buying this crap?