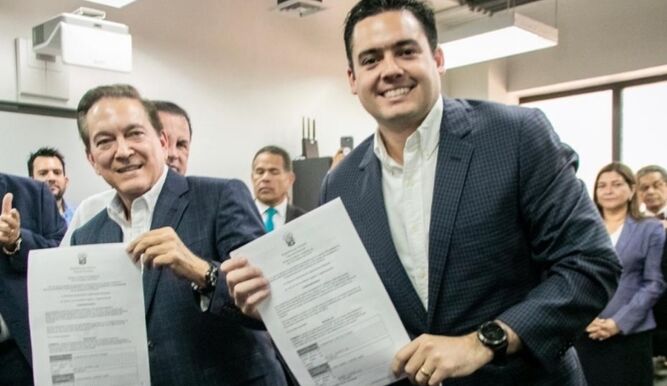 Cortizo and Carrizo in happier times

“If in normal times we demand transparency, now more. We demand transparency in purchasing processes to deal with the pandemic. The Public Ministry must initiate investigations with the slightest suspicion of an act of corruption and whoever falls if it is found  to be true, "said Panama’s  Chamber of Commerce, chaired by Jean Pierre Leignadier.

Carlos Barsallo, president of the Panamanian chapter of Transparency International, said that for an investigation to be objective, it is necessary to have all the necessary information and to do it freely and independently, and that would imply separation the position of the investigated official.

The issue arises after Cortizo said that he would make changes to his Cabinet, but that neither José Gabriel Carrizo Minister of the Presidency, nor  Public Works Minister Rafael Sabonge, will leave.

Sabonge managed the construction - in one month - of the Panama Solidario modular hospital, which cost $ 6.9 million, without equipment. The work was delivered on April 16, and since then, the Public Ministry opened an investigation ex officio and the Administration's attorney, Rigoberto González,He has received two complaints against this minister: one because he rejected a proposal by a Chinese consortium to convert tion the Amador convention center in a temporary hospital with a thousand beds; and another, for the alleged use of second-rate structures in the construction of the hospital. While Carrizo has been under scrutiny because his ministry managed the purchase of fans with up to 900% surcharge. The transaction fell after the cost was exposed. The Ministry of the Presidency was in charge of managing the millionaire funds from the health crisis, but, due to questions, the matter was transferred to the Ministry of Health, the portfolio that leads the strategy against the pandemic.

José Isabel Blandón, president of the  Panamenista Party, said that loyalty to the country cannot be compromised by a "misunderstood" loyalty to a couple of ministers.

Credibility, he said, must be the President's main asset in running the country, and recent corruption scandals have significantly affected that credibility.

Ricardo Lombana, president of Otro Camino Panamá, said that the country has been awaiting accountability for more than a month. "To support the ministers in question is to protect them.”

Rómulo Roux, president of the Democratic Change party,. "I agree that due process and the presumption of innocence must be respected. But I ask the President to honor his commitment to transparency and accountability. Only in this way can he regain the confidence and credibility he needs to help move the country forward, "

José Ramos Reyes, secretary-general of the Popular Party, warned that the President "is burning" along with those ministers. “

The Panamanian Association of Business Executives, led by Mercedes Eleta de Brenes, has advocated "full transparency" and accountability by all state institutions in the midst of the emergency.

Political scientist Richard Morales, said Cortizo has the responsibility of demanding accountability at the slightest indication against a member of the government. “Not doing so, being the immediate superior of those involved, is complicity with corruption.“

No mask but another total lockdown over the weekend again. When will Cortizo and his ugly health lady captured from the people in Panama to get rid of this self service Regime ? What was your meal today lobster carre lockdown plus red blood wine on health issues? Is there a room in the mental health clinic for him and her ? Blow out the last gringo and half the canal passages only a genius like you cattle idiot is able to do so by constant increasing cases. The WHO pays how much a month ? 20 million on your cattle account ? Democracy has sometimes to be brutal even on the streets.

More than 100 nations have asked the IMF for help. The sheer stupidity of this coronavirus lockdown is beyond belief. It seems no politician bothered to ask advice from anyone other than epidemiologists. Politicians who failed to consult other fields including economics should resign.

What! Where is their masks? Where is cicero3 and chele and captain when you need them? You better get to cortizo's office right now and straighten him out! If that was Trump, they would be screaming bloody murder. Ohhhh wait a minute, masks are only for sheep. The elites are immune.