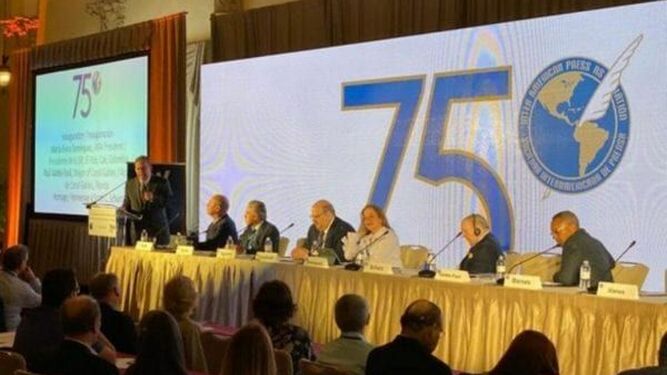 The General Assembly of the  Inter-American Press Association (IAPA), meeting in Coral Gables, Miami, has called on Panamanian authorities to take steps to guarantee the full exercise of press freedoms and expression.

In a resolution released on Monday, October 7  the IAPA invites the authorities to repeal the rules that maintain the criminalization of insult and slander, and that these causes be brought "exclusively" in the civil jurisdiction, "with due ceilings on the compensation that prevent, in the case of a conviction, the closure of means ".

The organization considers that in Panama "the judicial system is being abused through the presentation against the media, journalists, columnists and executives, of criminal complaints, civil lawsuits and in family jurisdiction, by a former president of the Republic and other former public officials. "

It also refers to the "exorbitant sums" that are being claimed through these legal actions, which "could generate a climate of self-censorship with unfortunate consequences for democracy."

Earlier, the Panamanian delegation to the IAPA General Assembly presented a report with the incidents recorded in the last semester, regarding press freedoms and information.

The report details that, since last March, the newspaper La Prensa and its journalists were sued 10 times by former president Ricardo Martinelli  (2009-2014), who alleges the commission of crimes against honor. Of these, eight were admitted by the Public Ministry and two rejected. Those that are in the process  face civil claims for around $10 million. In total,  Corporación La Prensa (Corprensa) - which publishes La Prensa and Mi Diario - has been the subject of 20 criminal complaints and 13 civil lawsuits, with claims totaling about $89 million dollars and including 11 executives and 30 journalists.

The report also notes that the complaints against the authors of two opinion articles published in the newspapers El Siglo and La Estrella de Panama are still pending: one by the citizen Mariano Mena and the other by the journalist Alberto Velásquez.

The report also details the case of  Mariela Ledezma and Annette Planells, hosts of the Salt and Pepper radio program , charged with the alleged commission of crimes against honor. And, more recently, a complaint against the vice president of Informative Affairs of TVN Media , Sabrina Bacal, for an alleged case of slander and insult. All were filed by Martinelli.

"The decriminalization of slander and insult crimes is required for claims to be handled by civil jurisdiction and, at the same time, to set limits on the amounts in civil lawsuits so that these processes do not become tools to intimidate journalists and close the media, ”it stressed.

Martinelli’s media arm
On the other hand, the Epasa Group -  controlled by  Martinelli- denounced that it is subject to pressure from the Public Prosecutor's Office (MP) and that there is an “information blockade” by that institution through the denial of access to public information.

Epasa reported that they had received information that their facilities would be raided by several prosecutors. However, after the publication of the complaint, the MP issued a statement denying the search, in addition to accusing Epasa of "misinforming" to harm the image of his institution.