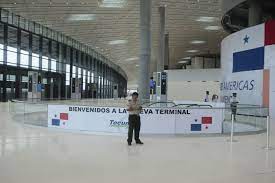 What begins badly does not end well, and that is precisely what has happened with the new Tocumen terminal, a work that Odebrecht built for an exorbitant amount, typical of all the projects from which it took money to pay bribes to servers public of Panama and abroad. The terminal should have been delivered years ago, but it has been granted so many addenda to the contract that, if there is no halt, it will end up delivering it when the planes will go electric. The latest modification to the contract gave it a five-month delivery period that ends precisely this month. The work did not pass a technical inspection, in which 10,547 situations were discovered that the company must correct before delivering the project, and which entail an outlay of $ 9.7 million for Odebrecht. But Odebrecht has already announced that, for the umpteenth time, they will not be able to meet the deadline. So the patience ran out: Tocumen, SA could administratively resolve the contract, a decision that comes years late, although it is better late than never. It is an investment of almost $1, billion, whose administration has been chaotic and irresponsible on the part of all the governments that took part in the project. LA PRENSA, Sep.17.

Delta and Copa will will increase US flights in De...
0
Copa aims to elevate women’s role in company
2
Chamber of Commerce raises Panama growth forecast ...
0
“Maelstrom of scandal and corruption”  - busi...
1
Electoral reforms can’t be a tailored suit – b...
2
Job recovery must be common obsession - business c...
2

BEST URGENT EFFECTIVE LOVE SPELL TO GET YOUR EX / HUSBAND / WIFE BACK FAST AND TO SAVE YOUR MARRIAGE NOW CONTACT LORD ZULU ON WHATSAPP DIRECTLY +1 (424) 361‑7554. Hi everyone I'm here to testify a great and powerful spell caster called Lord Zulu. I was so confused and devastated when my husband left me without a word, I needed him back desperately because I loved him so much. So a friend of mine introduced me to this powerful spell caster who had helped her in getting her lover back, so I contacted him and he promised that in less than 72 hours he will come back to me. After I did all he asked, to my greatest surprise my husband who had refused to speak with me came to my house and asked for forgiveness for all he had made me go through and now we are living happily together, if you have any relationship problem I will advise you to contact him for your testimonies. Below are his contact details. Contact him on WhatsApp @ +1(424)361‑7554. BLOGSPOT: allsupremepowersolutionhome.blogspot.com EMAIL: allsupremepowersolutionhom.website2.me

And it's still idiotic how the domestic/international connections requires a bus ride.